4 weeks down, 4 weeks to go. I don’t actually know what will happen at the end of “8 weeks”. I assume that’s just when I will be able to walk without crutches and probably be able to start doing “things”, but I really have no idea.

So this is the follow up post I promised to re-cap my follow up blood work/bone scan and talk about my feelings! Yay, I love feeling feelings!

First off, I had a “bone metabolic” blood panel done to make sure my bones were healthy and nothing weird was going on. Everything was right where it should be. The only thing I’m low in is Vitamin D, but I think almost everyone has some vitamin D deficiency unless you live in Florida maybe. And it was low but not in the low-low category.

Then I had a DEXA bone scan done and all was well there too. My doctor pointed out that I didn’t have bone cancer or any tumors and I was like…”oh good!”. I hadn’t even considered those things.

At my 2 week follow up appointment I got my staples removed (not painful at all) and they took new X-Rays! The surgeon was very pleased with how I was healing and he said it’s going to heal up great. He said, “I’ll see you back for your 6 week appointment and I think by then you are going to be asking me when you can start running again. And we’ll have to negotiate on that.” I don’t think I’ll necessarily be asking when I can run because I feel like running but more of like, in theory, when do you think I will feel good enough to consider running? But for real it’s the furthest thing on my mind. I just want to be able to sit cross-legged and go to yoga! I miss stretching the most!

Second, let’s talk about my feelings! I have to say when I went to the E.R. and that first doctor told me I broke my hip, I needed a hip replacement, I would need weeks and weeks of therapy I was FREAKING OUT. Like sheer terror. I was not at all prepared for that because I had not been in any sort of fall or crash and I had never even had pain before that day. So it’s not like when you know something is wrong and you can kind of brace for it or maybe even want to hear you need surgery as is the case when you are in a lot pain. I remember looking into my husbands eyes when we heard that news and I was in panic and he was so calm and he kept saying, “It’s ok babe, you are going to be fine. I know tons of guys who have all sorts of pins and hardware in their bodies and they still run”. And of course that was encouraging for me to hear!

So yeah, that was totally unexpected. I can’t remember when I got the news that I only needed 3 screws and not a hip replacement. I was so relieved but still so scared and not certain that was even the truth because I hadn’t talked to the surgeon yet.

That first night in the hospital I cried and cried. I remember telling my husband, I’m just going to cry for a while now. To me it feels good to just feel all the feels and feel sad and scared and all that and to get it out of my body. Otherwise it gets trapped, so you have to let everything out!

But then day of surgery and certainly after surgery not one single tear has been shed. Because once it was over then the fear was gone and everything would be better from day 1 on. And it has been!

I think a lot of people assumed I would go stir-crazy not being able to workout but I have had a surprisingly easy time with laying low. I think it helps that healing bone takes a lot of energy so I sleep and eat a lot without having all the effort of exercise. I finally found “that one crazy trick” that you see all over the internet, haha! I also have really been into jigsaw puzzles. I think puzzling saves me. You can only sit on the couch and watch TV and read for so long.

I can’t say I’ve had any drastic changes. Every day it feels the teensiest bit better so as the days add up I’ve gone down to only needing 1 crutch and slowly things are just getting easier. Except for putting socks on. Socks are still the worst.

I make a point to drink one cup of bone broth every day and drink one protein shake with collagen powder in it. I am also taking Vitamin D, Calcium and Magnesium. I heard that product CALM + Calcium is a formula that’s really good for getting into the bones and making them strong so I just started taking that.

Ummm, that’s about it. Not terribly exciting. In 2 weeks I go in for my 6 week checkup and I am excited about that!

I will leave you with a picture of Rocco because (obvi) he’s the cutest! This picture is from a camping trip to Sun Valley-a week before I got hurt. Rocco LOVES camping and he loves our trailer, which is a good thing because we basically got it for him. Rocco is a total watch dog in hotels and won’t sleep but he feels right at home in our “Clipper”. He loves camping because he can run around like a little wild animal and you can see in his eyes how much he enjoys the crisp mountain air 😉 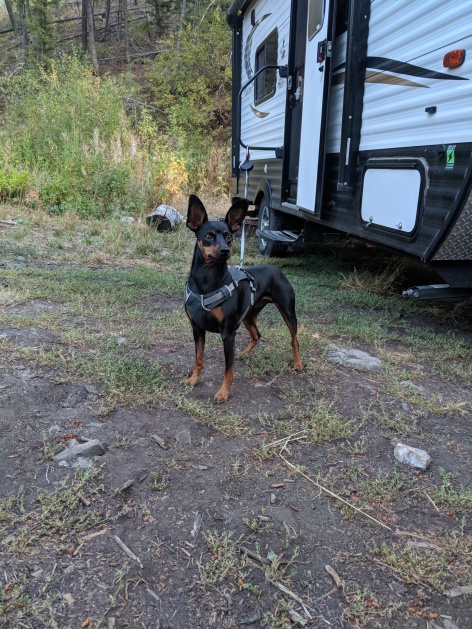