Want to hear about what I’ve been eating for breakfast lately? It’s such a fascinating topic, haha!

This isn’t just what I’ve been eating lately. This is what I’ve had for breakfast almost every day for the last 4 months straight. 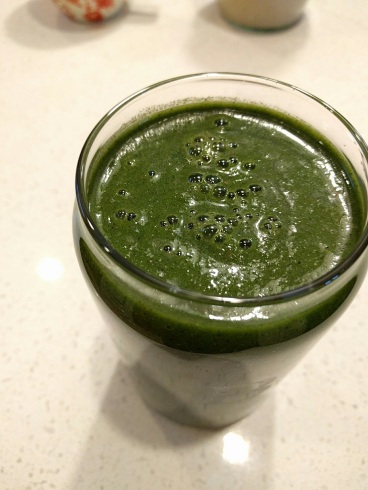 Ugh…Laura!!! Boooorrrring! How many times have green smoothies been blogged about on the internet? Too many!

Well believe me, I am right there with you. This came about over the summer. I think I stumbled upon a smoothie recipe (and there are approx 19 billion on the internet) and this was actually for a 30 day smoothie “challenge” I believe. The essence of this challenge was basically to have this drink every day for 30 days and by the end you would notice clearer skin (count me in!), improved energy, etc.

Well, I had absolutely no intention of doing the 30 day challenge. I just thought it sounded good so I made it one day and my husband and I both loved it. We felt vibrant and oh so proud of ourselves for consuming a days worth of veggies for breakfast! So I made it again the next day, and the next and so on because we just really like it. The days we haven’t made it we missed it.

When I first saw this recipe I thought it looked like soooo many ingredients and like it would just be a huge, intensive, not to mention expensive process. But it really isn’t. I mean, this recipe makes 2 servings so you’re basically just eating 1/2 an apple and 1/2 a banana a day which really is not a lot of produce. It just looks like it. I haven’t done the math on it but I didn’t notice a spike in my grocery budget because of it.

I change the ingredients up so that I’m using produce that’s in season, but this is the basic recipe. Oh and I do use all organic produce because I think it’s important when you are eating large quantities of produce like this. Otherwise that would really be a lot of chemicals to ingest on a daily basis! 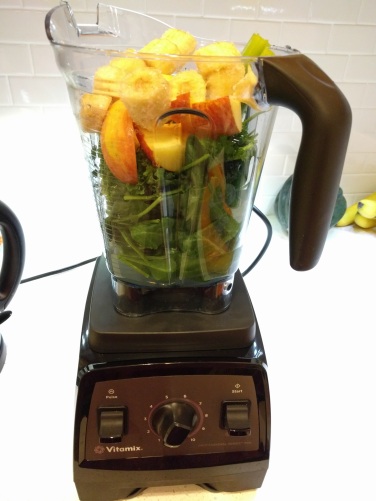 Here it is! It’s basically a full blender!

And in the background there you can see the tile back splash we installed over the summer. Photos coming soon…

One thing I like to add is aloe vera. Not the juice but a whole chunk! It’s supposed to be good for sooo many things like skin elasticity & intestinal health. I can’t taste it in there at all.

I’ve been able to find it at my local grocery store.

Boy, isn’t that a hot topic?! Such controversy around protein powder these days. What should you use? Soy? Whey? Hemp? Nothing?

When I first started on a plant based diet Vega protein was the only plant based, non-soy, protein on the market. Now there are SO MANY great plant based protein powders. VitaCost sells pretty much every product on the planet.

I have been using Vega protein for nearly a decade now and I do still like it. Plus Costco sells it so that’s a bonus. But lately (last 2 weeks) I’ve been making an effort to consume less Stevia. If you haven’t noticed, it’s used everywhere now and I’m starting to question if it really is all that healthy? You can google that topic and you’ll get some interesting results. My gut tells me-If it tastes too good to be true, it probably is.

Because Vega does contain stevia I started sampling some different protein powders trying to find an unsweetened alternative. Even “unflavored” protein powder has stevia in it. Weird.

The one I ended up buying and am now using is Raw Protein Unflavored protein.  You wouldn’t want to drink this stuff plain with just water but it is fine in a smoothie. The texture is a little chalky but I can’t really complain- I mean it’s basically a bunch of plants! It also contains digestive enzymes and probiotics so I feel like I’m getting a lot of good stuff at once. And the price is better than Vega too so that’s even better!

My husbands preferred protein powder is Jay Robbs Egg White Protein Vanilla. As the name implies the protein comes from egg whites so it’s generally easier to digest than whey or plant protein.

Alright, this is turning into a novel so I’ll wrap up here with a photo of Rocco! Last weekend we went to visit my Grandmother and we stayed in a hotel that had a fireplace. We bought one of those fire logs and Rocco saw fire for the first time!

My mom says the caption on this photo should be “Father, how will Santa bring me presents if there’s a fire in the fireplace?”, haha!

The answer of course is that this Santa shops on Amazon so all his gifts come UPS, ha! That reminds me, I just ordered him a really cute coat. Stay tuned…

And of course have a Happy Thanksgiving!