I can’t believe it’s August already! I had to go to the mall on Saturday (the worst time to go to the mall) and the parking lot was more crowded than Christmas! And then it dawned on me that everyone was back to school shopping.
I love fall clothes but the thought of buying sweaters and skinny jeans when it’s nearly 100˚ outside just sounds gross. I was at the mall suit shopping for my husband without him-so I just looked like a creeper checking out mens suiting and some mens shoes too. I didn’t find anything for him but I did make the mistake of going into lululemon and came out with 3 new things for myself! Ha!
Speaking of that husband of mine…he just had a birthday on Friday! He loves cheesecake and he loves oreos. I found a recipe (thank you pinterest) for Oreo Cheesecake Bars and just had to make them.
Let me be 100% clear: These are not health food in any way shape or form. There is nothing even remotely healthy about them and they are definitely not vegan. But I have a strong belief about desserts: If you are going to eat dessert, eat good dessert. Save the black bean brownies for another day. A birthday demands something special. 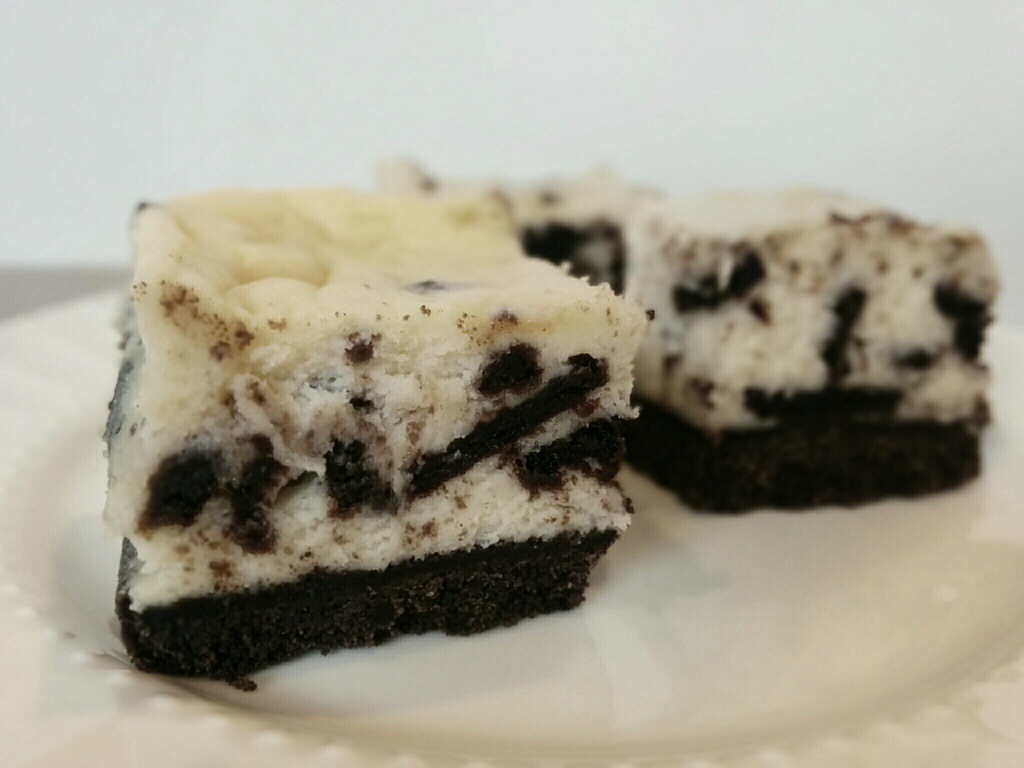 They turned out incredible. I’m not much of a baker and I had never made cheesecake before but I think these bars are probably the best cheesecake I’ve ever had. And worth every single delicious calorie.
I got the recipe from this blog. Instead of using oreos I used Newman O’s since at least they don’t have partially hydrogenated oil or high fructose corn syrup in them. And because of that I probably should have added 1 more tablespoon of butter to the crust recipe because I think Newman O’s are a little drier than oreos. Not that I’ve ever properly compared the two…

Rocco continues to be awesome. Even though he’s only 4 months old I swear he is 100% potty trained! We hung a bell up on our back door and we taught him how to ring the bell when he wants to go outside! Of course he still loves the method of hurling his body at the blinds when he wants to go out, BUT, when we are out of the room or far away he will ring the bell to go outside and potty. We think he’s a genius.
He’s also been going jogging with me and he does so well. He’s really good at “leave it” when we run by manure. Puppy training class has definitely paid off.
He is so funny. He loves to hide and burrow.

And here he is in my office, patiently waiting for me to finish up my work.

Have a great week and enjoy this last month of summer!
Laura