Last week I impulse bought a tub of pre-packaged kale chips from the grocery store. They were $5 which is way more than I would normally spend on a small snack but I wanted to try some legitimately good kale chips after my failed attempt. My kale chips were seriously so bad I haven’t wanted to even try kale chips since then.

BUT, as I mentioned I bought some from the store and they were INCREDIBLE. The label stated the container held 2.5 servings. I scoffed at that because obviously it was only one serving. Which I ate all at once. Mmmmm. So good. They were dehydrated rather than baked. But oh, the stomach ache I got afterward. I guess it really was 2.5 servings.

I vowed to never eat an entire batch of kale chips by myself in one sitting ever again.

But then last night I made kale chips and ate the entire batch for dinner.

Like mother like daughter 🙂 This little stinker was sneaking kale stems out of the garbage every time I turned my back. 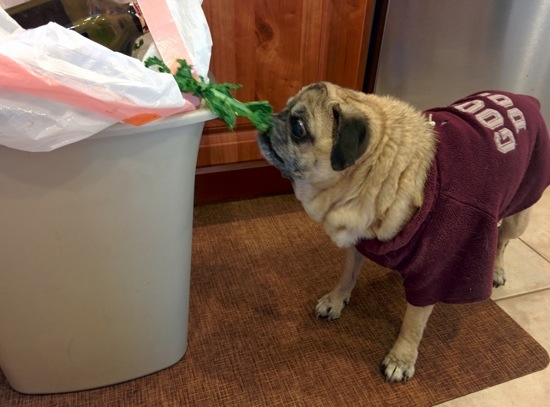 I am the worst with anything that tastes good. If I don’t have control around a kale chip, imagine me around a potato chip. Or chips and salsa. That’s the worst for me. I will absolutely eat chips and salsa until I hate myself.

So anyway, back to this story. I made kale chips myself and they turned out great!!!!!! I can’t take any of the credit. I got the recipe from the Vega website and felt brave so I tried it. These are the changes/notes I have:
1. After tearing the bits of kale up I used a paper towel to try to get as much water off as possible. I think one of the reasons my last kale chips didn’t turn out was because they were too wet.
2. A little dab of oil will do ya’. The pieces that had too much oil were soggy.
3. The recipe says to bake for 40 minutes but mine were done after 20 minutes, so keep a close eye on them.
4. I used a combination of nutritional yeast, paprika, onion powder and pepper on my chips and they were divine.
5. The amount of oil & seasoning is totally dependent on how big your bunch of kale is. My bunch of kale was enormous. It filled 2 large baking sheets. I didn’t measure anything. Just poured oil and seasonings and it turned out great.

Truth be told, I only ate half the batch (which is still a lot). I had my parents over and forced them to eat the rest because I couldn’t be left alone with the kale. Then I forced them to drink my green juice and they loved it!

Speaking of Vega, there is a new Thrive Cookbook out! I haven’t ordered it yet. I went to their website though and started pinning recipes like crazy. If all the recipes in the new book are as good as the ones online I will definitely get it.

That’s all for now! I strongly recommend picking up a bunch of kale on the way home tonight and making these chips! Have a great week 🙂
Laura

One thought on “Kale Chip Redemption”