Quesadillas were a staple of my diet in my early 20’s. Sometimes I would run out of cheese so then I would just use butter instead. Yes, butter on a tortilla for dinner…ah to be 24!

Here is a much healthier version of a quesadilla with a really delicious nacho “cheese” sauce. I have made several vegan cheese sauce’s, and over time I have developed a love for them. The thing you have to get over though, is that they taste ABSOLUTELY NOTHING like real cheese. I actually think the only similarities are the yellow color and the nature in which they are used.
Important note: At first this sauce looks runny and not too appealing. But after heating it up for a few seconds in the microwave or stove top it gets really nice and thick, just like a proper nacho cheese sauce. It’s really good for veggie dipping too!

I ate a version of this quesadilla all week and it was delish. Sometimes I would add tofu in to the mix and eat it like a burrito. It’s all good!

I don’t think I really need to explain the concept of a quesadilla or burrito. Obviously you take a tortilla and fill it with whatever goodness you want to eat. For these I used:
Ezekiel tortilla
black beans
sometimes tofu
cilantro
avocado
vegan chili cheese sauce (see below)

Place the tortilla in a pan over low heat. Add ingredients including sauce. Heat through and eat! 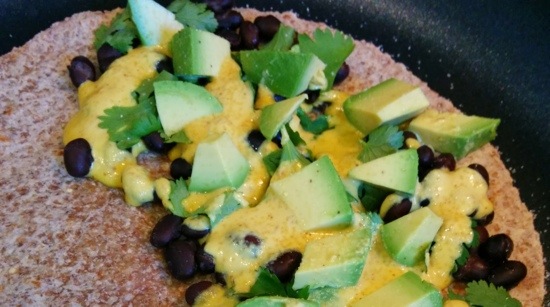 Lilly is doing well and continues to be her usual sleepy, cute self.

Her fingernails have gotten so long! Since she never walks she doesn’t wear them down. I have cut her nails myself since I got her and I don’t know how she does it-but she is SO STRONG! I swear, she could fight off 10 men at once if they tried to clip her nails. Ok that’s a slight exaggeration. Over the weekend my husband held her and I clipped her nails. Now we just need to do that every week for the next 6 weeks to get them to an appropriate length.

Place all ingredients in a blender or magic bullet and blend until smooth. Heat the sauce to make it thick. Store in the refrigerator.

I’m so excited the Winter Olympics start today! Have a great rest of the week and weekend!
Laura

One thought on “Grilled Quesadillas with Vegan Nacho Cheese Sauce”