I eat some pretty weird stuff which I realize will probably be on the fear factor side. Also, confession time, I eat some animal based foods now! I feel really guilty about it but girlfriend gotta get her protein from somewhere, you know what I’m saying?

Ever since I hurt my leg about a month ago I’ve become extremely lazy in the food preparation department. I can’t stand for very long so I am all about things I can make FAST! And I must confess, I’m loving the simplicity of my meals. They might not look terribly appetizing, but I’ve been eating these same foods for a month straight because they are just so easy. I prepare my lunches for the week on Sunday night. I get out 5 glass tupperware bowls and dish all my food up. It takes me about 1 minute. And a disclaimer here: it might not look like I eat very much but keep in mind I have the activity level of a pug right now. I would be eating more if I was more active.

Alrighty, here we go. I start my day with the most bizarre thing…

Wake up: drink a mixture of 1/3 cup orange juice, some hot water and 1 tablespoon gelatin. I know, gross right?! Why am I drinking gelatin, what a weirdo! It has a lot of health benefits. Google it. Maybe I’ll write more about gelatin later. 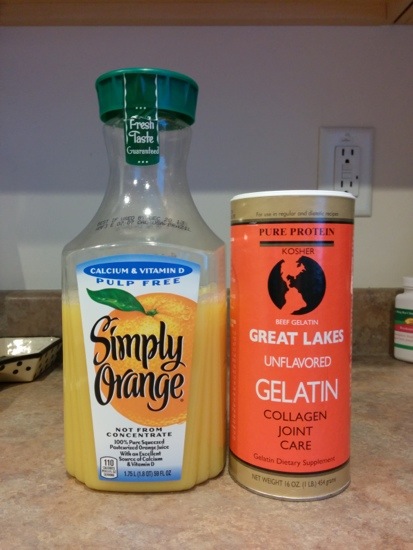 Then I have coffee. French press coffee with some unsweetened almond milk and a few drops of stevia. I wish I could like plain black coffee but I’m still not there and I doubt I ever will be.

Then I eat my next weird thing: Ezekiel bread, toasted and then topped with 2 teaspoons coconut oil and a drizzle of honey. I tried this on a whim and WOW. Coconut oil on toast is amazing. And I’ve read a lot about the benefits of eating coconut oil, so it’s not just some weird and dangerous thing I’m doing. See ya later almond butter…

Next up, morning snack. I feel like a hobbit because I always have to eat second breakfast. Second breakfast for me lately has been hummus and carrots. Pardon the messy desk picture.

But sometimes, especially on weekends I have a grande soy latte from Starbucks for my morning snack. Hey, 9 grams of protein is no joke! I’m sure it has plenty of sugar since they use sweetened soy milk. But I’m choosing to look the other way on that one. 🙂 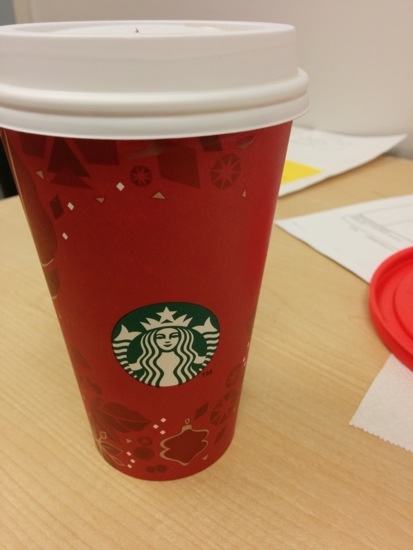 Is it just me or do the red Starbucks cups have some addictive quality? Why do they make me so happy and want to go there every day?

Now it’s lunch time and here’s the shocker! I’ve been eating shrimp EVERY DAY for the last month. My husband eats shrimp and he gets the frozen bags from Costco. I was checking out the nutrition on shrimp and was SHOCKED to see that 11 shrimp have 17 grams of protein and just 70 calories! 17 grams of protein! That’s as much protein as 1 cup of black beans, but 1 cup of black beans has 240 calories. You see what I’m saying here? I’m trying to get more protein these days. And honestly, I would eat fish too if I liked the taste of it.
So my lunch consists of shrimp, brown rice & quinoa (I just cook a mixture of the two together in the rice cooker. Not for any special reason, just to use up all the quinoa I have) and that chunky guac I posted a while ago. It’s seriously a delicacy!

I follow up with edamame from Costco. They come in these convenient little pouches. I don’t microwave food in plastic so I dump them out into the glass tupperware my lunch was in, add a couple tablespoons of water and microwave for 2 minutes. Drain the excess water off and sprinkle with a tiny bit of salt. I try not to get too carried away with salt.

A few hours later I’m hungry again so I have an afternoon snack: 1 scoop vega sport protein (vanilla), some frozen blueberries (Costco again), 1 tablespoons flax oil (really helps my joints plus good omega oil profile!), and unsweetened almond milk. Blend it up in the ol’ Magic Bullet. I really need to get in the habit of checking my teeth after I drink this… 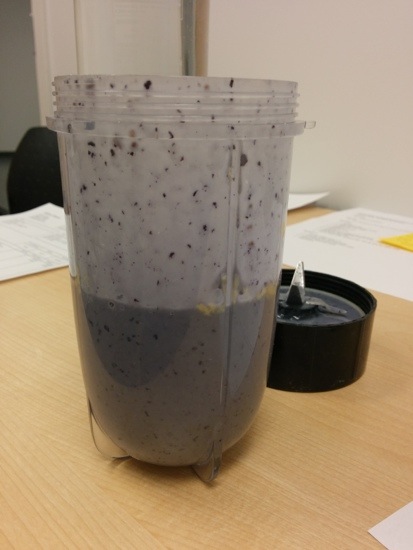 Dinner time! I have really been trying to not eat chips before dinner. But sometimes I come home and I grab chips out of the pantry because they’re there, they’re yummy and I’m hungry and lazy. But I am really trying to curb this habit by preparing my dinner as quickly as possible and then if I’m still hungry find a snack. Dinner for me is always a salad. Sometimes it’s salad with tofu, sometimes it’s salad with a Dr. Praeger’s veggie burger with either dressing or balsamic vinegar and oil.

The last few nights I’ve had this for dinner.

I know it’s not pretty but it tastes good, it’s healthy and it can be prepared in under 5 minutes. Heat a pan on the stove, throw some shrimp, spinach and spaghetti sauce in the pan, cover the pan with a lid to steam the spinach and within minutes dinner is ready. I like to add crushed red pepper except sometimes I add too much and make it ridiculously spicy and then it’s hard to eat.

So that’s pretty much what I eat. Sometimes I eat chips or some peanut butter filled pretzels (thank you again, Costco) and every Saturday night my hubby and I have wine. My biggest diet downfall, by far, is over eating on the weekends. I eat super good Monday-Friday afternoon but then Friday night-Sunday I throw caution to the wind and eat whatever the heck I want. Well, not really I guess, but we do go out to dinner and I definitely indulge more. But then I realized if I’m eating really well 4 days a week and not so well 3 days a week I only net 1 good day a week! So my new goal is to keep it clean 7 days a week with the exception of pancake Sunday’s which are a tradition in our house.

I’ll be back soon I promise with Lilly stories, pictures and good stuff! Have a wonderful week!