I was dead tired yesterday. You know that feeling where around 4pm you are just counting down the hours until it’s bed time? I felt like that. Not because I had been doing anything wild or strenuous either. We just stayed up until about 2am hanging out with some friends, watching the movie 21 Jump Street. Hilarious movie by the way.

At the end of the night our friends sent us home with a bunch of “Chocolate Mouse Tuxedo Cake” or something like that. So not plant based. But soooo good. I decided to eat that cake for breakfast the next day because I reasoned that breakfast was the appropriate time of day to eat a tank load of sugar. Naughty, I know. Tsk tsk. About 20 minutes later I had a killer stomach ache and felt like I was going to go into a coma brought on by the type 2 diabetes I had just given myself. So, if you did any dumb things like that over the 4th of July weekend just know you are not alone!

But today is a new day!

Here is a really easy, tasty recipe for Cilantro Lime Rice, just like you would get in a restaurant, minus the grease. I used a rice cooker. The rice cooker is one of my all time favorite kitchen appliances. Cooking rice, quinoa or any grain is a pain on the stove top. You have to watch it constantly, it burns sometimes and who knows how much liquid to put in? With a rice cooker, you just throw everything in and it comes out perfect every time. If you don’t have a rice cooker, first, consider getting one. But second, go ahead and make this on the stove top. Just look up instructions on how to cook rice. 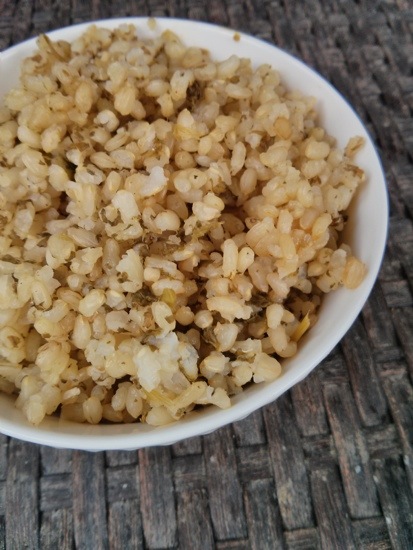 Chop off the last few inches of the cilantro stems and discard. In a food processor, or by hand, chop up the remaining bunch of cilantro, stems and all.
Place all ingredients, including the cilantro in the rice cooker (or pot). Add water to the 3 fill line on the rice cooker. Give it a stir. Press start. When finished cooking, stir again.

I’ll be eating this rice with my Spicy Tempeh Strips and grilled Zucchini for lunch this week. 🙂

Here is a picture of Lilly on a walk!

So tiny and lazy!

And so cute!
Have a glorious (and healthy) week!