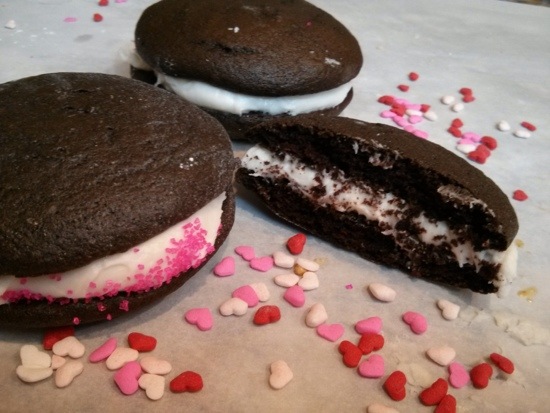 I have never made whoopie pie’s before, nor have I ever even eaten one! But for some reason I have been wanting to make whoopie pie’s for months now. And since it’s Valentine’s Day…well, that was the perfect excuse!

My prediction is that whoopie pie’s are going to be the next cupcake. You heard it here first, folks. Think about it, it’s 2 cupcake tops (nobody really likes the cupcake bottom anyway, right?) filled with as much frosting as you like. And since the frosting is sandwiched between two cake tops you can wrap them up and pack them with you. They are portable!

I just finished my second week of half marathon training. Only 10 more weeks to go! It seems like it’s going by fast. This week went much better than last week. I’m still really slow but it feels less like torture and I’m not counting down the minutes like I was last week.

The cake batter I used to make the pie’s was incredible. Even raw it tasted good which is always a good sign. This was my first time to ever use EnerG Egg Replacer but not my last! That stuff is really cool. It made the batter really light and fluffy.

I wasn’t sure how much batter to use per pie half. The recipe I used said it would make 10 pies. My pies must have been small because one batch would have made about 14 pies if two-thirds of them hadn’t burned. That’s how I know mine were too small-8 minutes in the oven burned them. I made a second batch and really kept an eye on them while they baked. There’s only about a 30 second difference between not quite done and baked perfectly.

To form my batter I used a two spoon “scoop and scrape” method. I scooped a heaping tablespoon up with one spoon, then used the other spoon to remove the excess batter and then scrape the batter on to the baking sheet. Leave plenty of room between cakes because they grow a lot!

This is the batter. 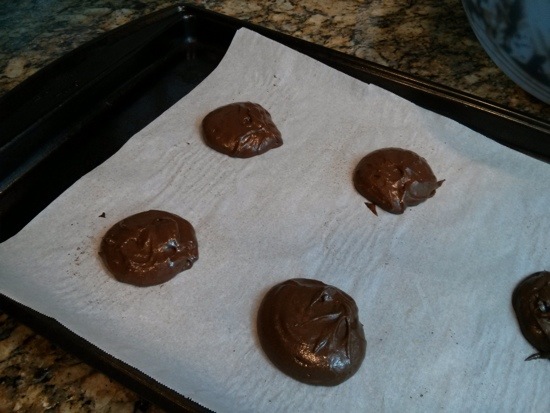 And here are my cakes! 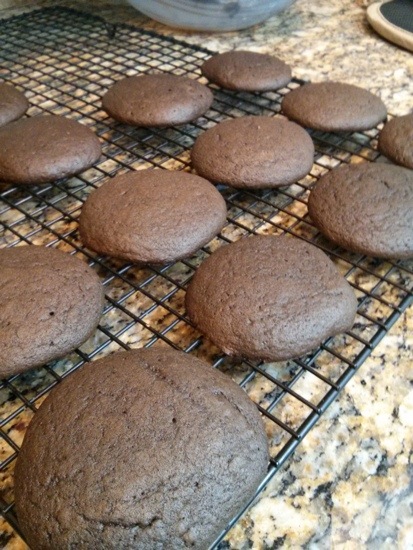 Here are the instructions, now that I’ve written a novel.

Preheat the oven to 400˚ F and line 2-3 baking sheets with parchment paper.

First, combine the almond milk and apple cider vinegar in a measuring cup and allow to sit and curdle while you prepare the other ingredients.

In a large mixing bowl, cream the butter and sugar together with an electric mixer. Then add the egg replacer mixture and cream again. Now, in several additions add the dry ingredients to the butter mixture, alternating with the milk mixture until you have a smooth batter.

Using two spoons (or an ice cream scooper, if you are brave), use the “scoop and scrape” method to get even sized scoops of batter on the prepared baking sheets. Bake for 8-12 minutes. Watch closely since you won’t be able to tell if they burn. You know they are done when you press on them and they “spring back”.

Allow them to cool completely before frosting.

There are no hard and fast rules when it comes to making frosting. You just keep adding powdered sugar until you get the fluffy frosting consistency you desire. This is what I did to make about 4 cream cheese filled pies and 6 mint filled pies.

Cream the cream cheese, butter and vanilla extract together using an electric mixer. Add powdered sugar until you have achieved desired fluffiness.

Frost as many cakes with this flavor as you want.

Then add in the peppermint extract, blend again and frost more pies.

Last, I made these “Peanut Butter Monsters”. I just wanted to try it. These were our least favorite flavor, but still good. The frosting isn’t as sweet, but that’s not necessarily a bad thing. 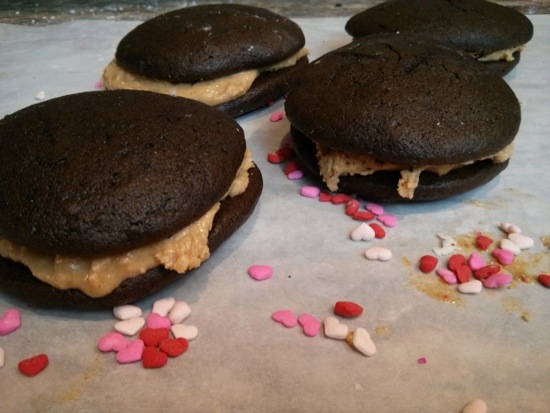 For the frosting:
Approximately 1/2 cup peanut butter
2 tablespoons vegan butter
As much powdered sugar as needed to make it into frosting consistency

Alright, that was the longest post ever! Have a wonderful week and a happy Valentine’s Day!