It is SO cold outside in Utah. Lilly says having to go potty outside when it’s 8˚ is cruel. I don’t blame her.

So far the cleanse is going well. All two days of it. For breakfast I have the Thin Mint Protein Shake, Creamy Tomato Soup for lunch, a handful of cashews for a snack and dinner is a salad made of brown rice, black beans, greens, salsa and guacamole. Normally I’m active and I would need to eat more than this, but right now I have a nasty cold so I have mostly been sitting and am therefore not very hungry.

Ok, on to the fun stuff. Costa Rica!

My fiancé and I are both planners so we had our trip all laid out. We rented a house in Playa Hermosa, near Jaco which has the best surf in Costa Rica. The pictures and description of the rental house sounded amazing so we booked it for the whole week. Our plan was to surf, go to a volcano, a national park, surf more and my fiancé likes to paraglide so of course that was a big part of our plans.

We got in late so we decided to stay the first night in San Jose because the rental house was about 2 hours away. The hotel we stayed at that first night was AMAZING! We were so spoiled that first night! We liked the hotel so much we stayed there again our last night since our flight went out early in the morning.

The second day we drove out to our rental house. We stopped and took lots and lots of pictures. 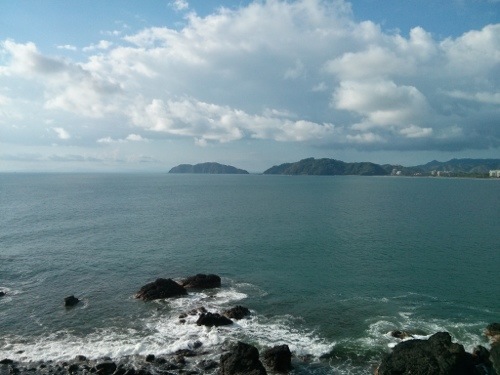 This is the beach in Jaco. Beautiful, dark sand, very warm water and consistently good surf.

Then we get to the rental house. It looks just like it did in the pictures. But now would be a good time to mention the house had NO AIR CONDITIONING and since the house is not lived in most of the time, it reeked of mold. Ok, that’s fine, it has lots of windows. We rushed around and opened every window and door in the house. But then you have to close the doors at 5 because the mosquitos are too bad. And the doors and windows didn’t have bars on them so it wasn’t safe to sleep with them open anyway. Now I should mention that every night there was gun fire nearby. Like, real nearby. And roosters that go off at 5:30 in the morning. So, we wake up at 5:30 after a night of hearing random gunfire in a house that is 84˚ with 75% humidity for a heat index of 91˚.

That didn’t get us down though. We were too excited to hit the beach. My fiancé surfs and I boogie board but I was eager to try surfing. So in to the warm water we go, it was amazing! I managed to stand up on the surfboard a few times…before breaking the board. Shoot. No worries, we rented me a boogie board instead since that’s my jam 🙂 We had the BEST day of surfing/boogie boarding. We laughed and laughed and laughed. It was a great day! Until we went back to the hot house, showered and toweled off with wet towels that smelled like mold. Yummy.

We had great food while we were in Jaco. It’s not typical Costa Rican food, its pretty much like the food you find here. We ate at a great sushi restaurant (veggie rolls) and a great “fusion” restaurant that served a little bit of everything.

The second day was equally amazing. We went to this place called “The Zephyr Palace” and it is hands down the most beautiful place I have ever seen. Rooms here START at $400/night. 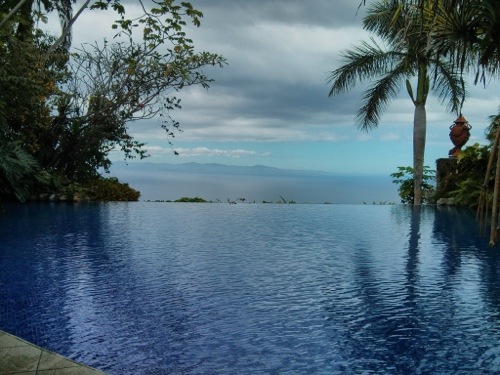 This place was incredible.
We stopped here and ate our homemade peanut butter sandwiches we brought 🙂

From here we went to the paragliding site because it was looking like it might be good for flying. I will post more pictures and videos of paragliding soon after I get them all off the camera. I probably took 100 pictures.

Here is one picture of future hubby assessing the site. It was so gorgeous! 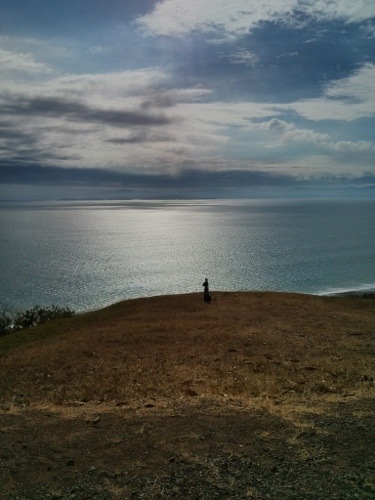 After he was done flying we went back in to town and had another great dinner. Around this time we started dreading going back to the house. It was sooooo hot in that house and it was impossible to sleep much. We were getting tired and a little desperate. We decided we needed to find another place to stay. A place with air conditioning. The next day was Christmas so finding a hotel with vacancy was tough. We went in to super nerd mode, each of us conducting searches on our tablets, cross referencing expedia with trip advisor reviews and the guide book. The search got gnarly. Every good hotel we found was booked. Every hotel with vacancy had awful reviews. We just. wanted. air. conditioning…