I am in the biggest food rut! It’s not really a rut though, it’s just that I’m still on my cleanse and I am honestly enjoying the same ol’ foods day after day! Combine that with a busy, fun filled schedule and that means I haven’t had much time to experiment in the kitchen.

I couldn’t face doing a post here without a new recipe though.

I thought about just posting pictures of Lilly instead. 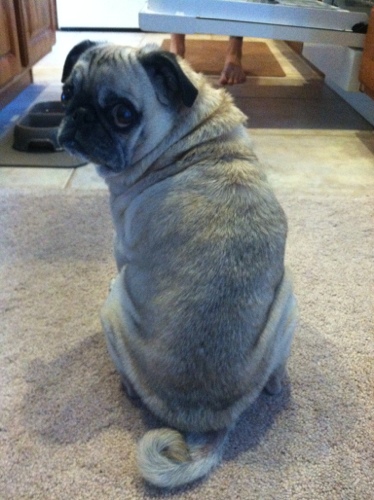 She has put a little weight on since her brush with death and is looking much better 🙂
Oh, and there has been speculation recently that my “boyfriend” I speak of is not real. Well he is, and if you look closely in this picture you can see his feet! Almost proof of his existence 🙂

Worn out from a craaaaazy day of sleeping

Back to the cleanse. It’s been 6 weeks already! I fell off the wagon last weekend and had a brownie. It was delicious! But afterward my stomach was very angry with me. So that motivated me to keep on this sugar-less, pancake-less, chocolate-less path.

The good news is, I have perfected beet chips! I know everyone is excited to hear that. This weekend I used gold beets. Ooh la la! Here is the method I now use. Heat oven to 350˚, slice beets as thin as possible. Line baking sheet with parchment paper. Spray parchment paper with non-cook spray. Line beets on tray as close as possible without overlapping. Spray beets with cooking spray, sprinkle with salt or season salt. Bake for 30-50 minutes aiming for somewhere between soggy and burnt to a crisp.

To say I do not miss sweets would be a lie. I do miss them. I often think about what I will introduce back into my life first. I have been pinning desserts on pinterest like crazy! Since I can’t eat dessert I just look at pictures of it? What a weirdo.

As I was craving dessert late at night I went foraging in my kitchen and whipped up a nearly cleanse worthy treat. The only thing I cheated on was a tiny bit of agave nectar. I needed something sticky to hold the ball together and agave nectar was close by. These aren’t by any means going to replace real cookies but if you are looking for a healthy, nearly sugar free “treat” then look no further. The mint version is my favorite.

Mix the almond butter, coconut, vega and ground flax in a small bowl. Drizzle agave nectar in to make the mixture stick together.
Roll the mixture into 7 – 8 balls. Roll each ball in coconut. Store in the freezer.

Mix the almond butter, coconut, vega, cacao, peppermint and ground flax in a small bowl. Drizzle agave nectar in to make the mixture stick together.
Roll the mixture into 7 – 8 patties. Press the patties into coconut on both sides. Store in the freezer.